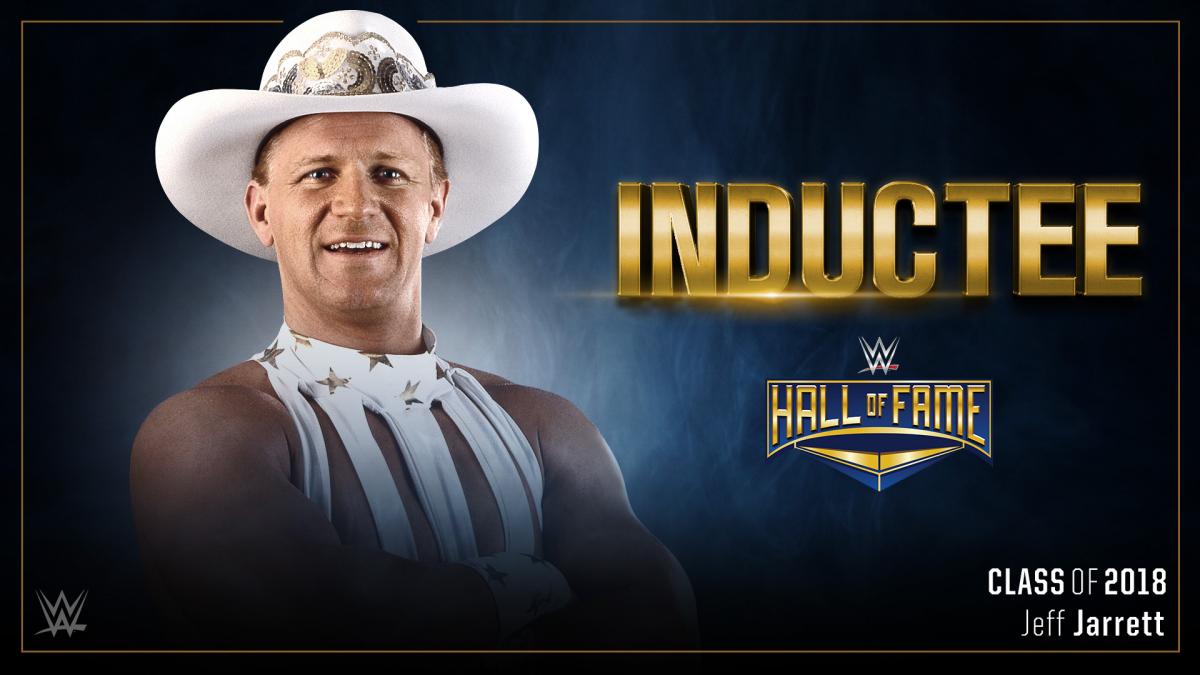 WWE confirmed the rumors that former Intercontinental Champion Jeff Jarrett is the newest inductee in the WWE Hall of Fame’s Class of 2018.

Several WWE superstars weighed in on the announcement, many of them congratulating Jarrett on the induction. Double J himself also took to social media to share his reaction.

There’s not enough space in a tweet or a post to say all the “thank-you’s” that I want to say!… https://t.co/fejTooaLwf

Some may look at Jarrett and say “really this guy?” when it comes to the WWE Hall of Fame, but his accomplishments alone make him worthy of the honor. Between this runs in WCW and WWF, Jarrett captured several singles championships, including three WCW United States title reigns and four WCW World Heavyweight Championships. He’s also a six-time Intercontinental Champion and had the most reigns with the title from 1999 to 2004.

Jarrett was also the second “Eurocontinental Champion,” after winning the European title from D’Lo Brown and a former tag team champion with Owen Hart.

Jarrett is regarded as one of the WWF/E’s most polarizing figures. He allegedly extorted six figures from Vince McMahon at No Mercy 1999 minutes before dropping the IC title to Chyna – Jarrett’s contract had just been up – then jumped ship to WCW.

People have their thoughts about his main event toward the end of WCW’s lifespan, but regardless of what critics thought, he was a main event player for the company until its last days.

Jarrett’s resume is full of championships outside of WWF and WCW, including several runs with the NWA World Heavyweight Championship.

Jarrett also had success as a promoter, a third-generation promoter at that, first with TNA – the company he helped start in 2002 – and later Global Force Wrestling.

Some have criticized his time in TNA for being a promoter who put its world title on himself – when the company was using the NWA World Heavyweight Championship as its top title – but he also helped give a lot of today’s top talent their first break, including current WWE Champion A.J.Styles and New Day member Xavier Woods back when he wrestled in TNA as Consequences Creed. He also helped wrestlers like R-Truth – Ron Killings – bring their careers to the next level.

Real talk @realjeffjarrett gave me my first gig wrestling on TV which led to @WWE giving me a shot years later. Cool to see him going in the HOF. Congrats man https://t.co/mNpNd4mXMp

Jarrett’s last few years in the business haven’t been the best, with reports of him being intoxicated at events and the debacle with GFW/Impact Wrestling and Anthem. After some time in a WWE-sponsored rehab, he seems to be on the track to recovery.

It’s not a surprise to see Jarrett receive this induction because McMahon is generally a forgiving person when it comes to talent. Jarrett has even said he and McMahon have kept in touch with each other after he left the company.

Jarrett’s Hall of Fame induction probably won’t lead to him having a significant role in the company in the next few months, but it will provide some feel good moments, including a potential rendition of “With My Baby Tonight,” before his Hall of Fame speech – or sing with potential inductor Road Dogg.