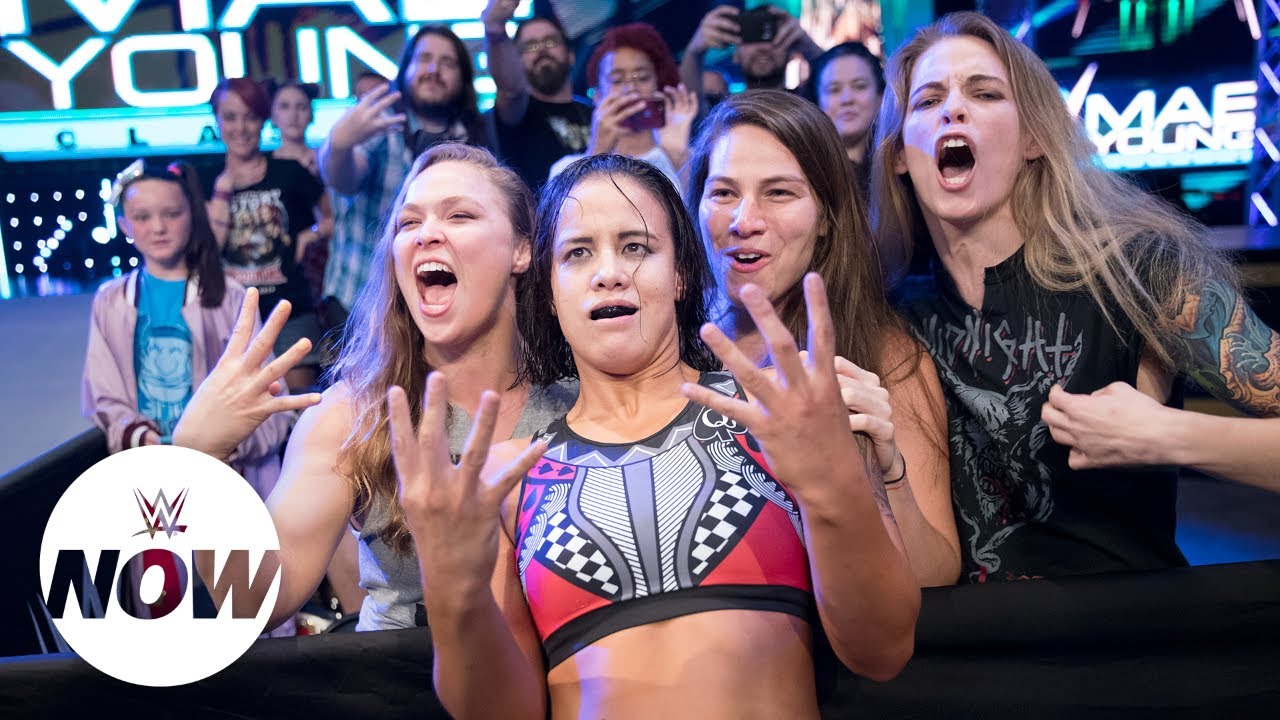 A professional wrestling prophecy was fulfilled during the NXT live event in Largo, Florida as Jessamyn Duke made her NXT event debut alongside her Four Horsewomen comrades Shayna Baszler and Marina Shafir.

“I heard, as it were the noise of thunder, one of the beasts saying, Come and see.”#wwenxt #fourhorsewomen #mma

It was a good showing Duke’s debut and is the beginning of what could be an impressive run for her. It is also the first step toward the three Horsewomen reuniting with Raw Women’s Champion Ronda Rousey on the main roster.

It has been almost five years since the four first appeared together on “The Ultimate Fighter 18: Team Rousey vs. Team Tate” where Rousey coached Bazler and Duke, and Shafir was an assistant coach. Their time on the show together grew into a friendship that would lead into a mutual love of pro wrestling and life changing experiences. The four started calling themselves the Four Horsewomen as an homage to the famous stable – and even started flashing the four fingers sign like their namesake.

This drew mixed reactions from people, mostly critics would call them out saying “They aren’t the real Horsemen.”

Each member of the Four Horsewomen found a different path to professional wrestling with Baszler competing on the indies and in Japan, and in the 2017 Mae Young Classic where she lost to Sane in the finals. Rousey signed with WWE in 2018 after months of speculation, making her on-screen debut in the Royal Rumble and competing at Wrestlemania 34.

Duke and Shafir signed with WWE back in May and were signed to NXT. Some speculate they will be called up to the main roster with Baszler to reunite with Rousey and kickoff the Four Horsewomen vs. Four Horsewomen feud. While fans are chomping at the bit to see this storyline come to life, they shouldn’t be disappointed if Duke and Shafir stay on NXT for some time.

Both Duke and Shafir are relatively rookies when it comes to professional wrestling. While their lack of experience does not mean they don’t belong in a WWE ring, their time in NXT will help them develop their in-ring abilities, promo skills and persona to prepare them for a main roster run. Being in NXT allows Duke and Shafir an opportunity to learn from some of the best trainers, as well as practice and refine their abilities – all while working in a production system similar to WWE’s main roster.

If they jumped straight to the main roster, they are going to have to grow their skills really fast without that coaching, and in front of a WWE crowd that will eat a performer alive if they feel that person isn’t ready for a main roster run.

An issue with Duke and Shafir being called up to the main roster with little experience, is there’s a chance they could be lost in the shuffle after several months on Raw or Smackdown. They will gain experience and have good matches with the Four Horsewomen storyline, which could last for several months. Where do they go after the angle is done? Do they stay in Rousey’s shadow, or does WWE creative go with the classic break up angle.

WWE has talent on both Raw and Smackdown women’s divisions, but the company’s creative department does not have a great track record when it comes to creating  qualitystorylines for wrestlers outside of the competitors in the championship picture.

The Horsewomen will have to face those challenges when they are eventually called up to main, but their time in NXT will have better prepared to adapt to that environment.

If there is a time on the main roster where creative separates the Horsewomen on seperate brands, Duke – who had established herself on NXT – can welcome that challenge and make the most of the opportunity.

With WWE establishing the NXT UK brand, Duke and Shafir have some new potential opponents across the pond like Toni Storm, Jinny and Isla Dawn.

NXT is not a dead end for any wrestler, let alone inexperienced talent like Duke and Shafir. It is a place where they can gain a wealth of knowledge and experience that will benefit their professional wrestling journey.