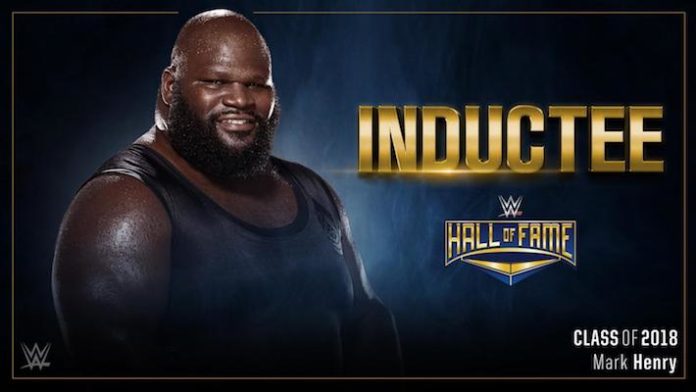 WWE has confirmed that Mark Henry is bringing the Hall of Pain to the Hall of Fame and will join the likes of Bill Goldberg, The Dudley Boyz, Ivory, Jeff Jarrett, Hillbilly Jim, Kid Rock and Warrior Award recipient Jarrius “JJ” Robertson as a part of the the 2018 WWE Hall of Fame class.

“It was a little while back. I was in Los Angeles with the powers that be… it was just an overwhelming feeling, you know? My face got hot” Henry said in an interview with USA Today.

“A couple of tears fell, and you felt like, instantly, all of the pain and torment that you put your body through, the sacrifices that you made – they were worth it. It paid it all off.”

“Well the first conversation I had, I thought it was one of my buddies playing a joke on me and I hung up on him. And my manager at the time called me back and said ‘hey, I just had Vince McMahon call you and he said you hung up!’ And I was like ‘that was Vince McMahon for real!?’ I felt so dumb.

Here he is, one of the most influential people in the wrestling industry calls you and you hang up on him thinking it was a joke. Eventually I called back and I said ‘hey, I hope you understand, I thought it was somebody playing a joke on me.’ And he said ‘don’t worry about it, I’m glad I could get you back on the phone.’

He was like ‘I want you to come to Connecticut and see how we do things up here.’ I said ‘am I going to get to meet The Undertaker?’ You know, I was such a fan, I just wanted to meet everybody.

Henry has wrapped up his in ring career and is now transitioning to a backstage role with the company he has been with since 1996.

“You know what, I saw a match – and I always study my matches. I always see what I did wrong, what I could do better. I was watching and there were things that I did that weren’t up to the standard that I thought they should have been. And a lot of that… I think some of it was age, some of it was the fact that I had some pre-existing injuries that I really couldn’t do all the things that I could do. And I didn’t want the fans to remember me being injured and being a shell of my former self.

I want people, when they remember me, to think of the Hall of Pain, when I was catching guys, 275 pounds. Picking up Big Show, close to 500 pounds, over my head and driving him through a table. And picking up Kane, 320 pounds and slamming him through tables. And jumping off the top rope to the ring and jumping out of the ring to the floor and splashing Kurt Angle. I wanted people to remember me at my greatest. Around 2015, I started to see my skills diminish. It happens to everybody. Father Time is undefeated. He is gonna win every time, and I saw him catching me.”