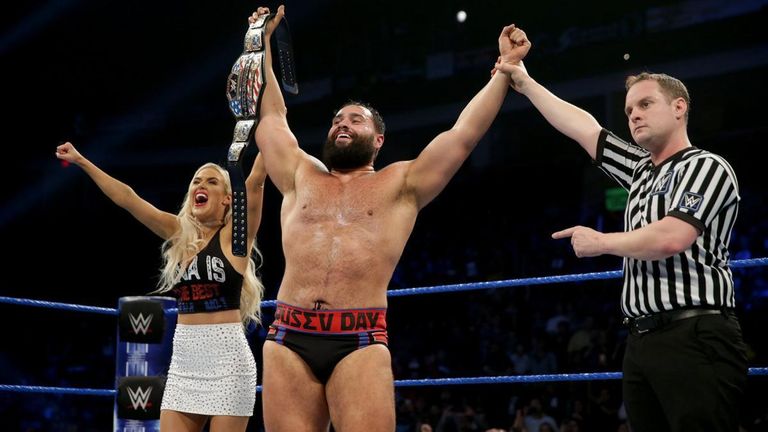 For Raw, it was funny to see Rhyno make a comeback to help out Heath Slater. During Slater’s match with Jinder Mahal, Rhyno dressed up as Santa Claus and was handing out gifts during the match. When it looked like Slater was about to win the match, the Singh Brothers interfered to help out Mahal, giving Slater the win via DQ. Rhyno then came to the ring to save the day. I guess that this means that they are back to being in the tag division.

For Smackdown, we have a new United States Champion! In the main event of Smackdown, Rusev was able to defeat Shinsuke Nakamura in a great match. This match was given a good amount of time and it was able to show what each competitor was about. Overall, this was an interesting change considering Nakamura’s title reign wasn’t really effective, so this is a change to embrace.

For Raw, when WWE announced that we would see new matchups, I expected some interesting things to see in the future. But, WWE decided to recycle the Riott Squad versus Bayley and Sasha Banks once again. This matchup was literally shoved down the WWE fans’ throats when the Riott Squad first came onto Raw and now they seem to be bringing it back. Hopefully though, one of these teams moves to another brand during this new era.

For Smackdown, one thing I noticed was how much they edited the crowd and other things during this show. A prime example was during Rusev’s entrance, they showed a clip of a fan chanting Rusev Day, which a shot that was taken earlier in 2018. Along with that, a majority of the crowd noise was edited too, which doesn’t give it much of a authentic feel.

Both brands put on a pretty good show. The Royal Rumble isn’t for another month so building it up extremely wasn’t necessary this week. Both shows were entertaining and helped integrate the Christmas theme too. With that said, I would have to say that Smackdown had the better show this week. With a new US champion, and a very interesting exchange between AJ Styles and Vince McMahon to close the show has questions going into next week. In conclusion, Smackdown continues to roll with solid show week after week so it’ll be interesting to see where this goes for 2019.