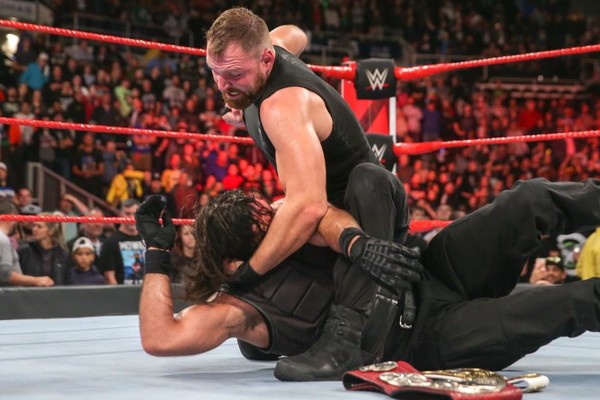 For Raw, Dean Ambrose turning on Seth Rollins after what was a really emotional show was one of the more shocking moments in WWE. After winning the Raw tag team championship from Dolph Ziggler and Drew McIntyre, Ambrose gave Rollins a dirty deeds and beat him up badly just moments after they won. The crowd was left stunned and it left so many questions going into next week.

For Smackdown, the segment and match between Rey Mysterio and the Miz was great and helped build up the “Best in the World” tournament occurring at Crown Jewel. The Miz threw some shade at Mysterio questioning his comeback, only for Mysterio to challenge the Miz to a match. The match happened and it was good from start to finish and ended when Mysterio won when he hit the 619.

For Raw, there was a fatal four way match between Nia Jax, Ember Moon, Dana Brooke, and Tamina and this felt like filler and put together at the last second in order to build up the women’s battle royal at Evolution. The match was quick and really was all about Ember Moon since she has the biggest upside going into Evolution.

For Smackdown, there was supposed to be a tag match with Mandy Rose and Sonya Deville versus Naomi and Asuka, but it just led to other women superstars coming out before the match could start and led to a brawl. While this was to build up the women’s battle royal at Evolution, there are better ways to doing this than having everybody come out at once and get five seconds to say why they will win.

Roman Reigns truly shocked the WWE Universe when he announced that he has to relinquish his Universal Championship because he is battling leukemia. This was very emotional and left the WWE to make some decisions going forward. Due to this, Braun Strowman and Brock Lesnar will go one-on-one at Crown Jewel for the Universal Championship now. With Evolution this Sunday, a lot of focus was on this PPV too and both shows did a pretty good job of building it up. Overall, I would have to say that Raw had the better show this week. There is a lot to process after this week’s Raw compared to Smackdown and it will be interesting to see what happens going forward.