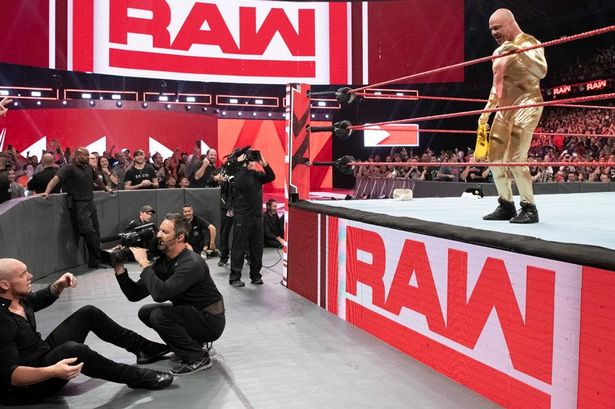 For Raw, there were many returns they had on their show this week. But, out of all of them, I would have to say that Kurt Angle’s was the best. When Baron Corbin decided to host a 10-man global battle royal, Kurt Angle decided to dress up as the Conquistador and eliminate Corbin in the end. When he unveiled his mask, the crowd was going nuts and during this segment, you could tell Kurt was having fun with it too.

For Smackdown, the rematch between Becky Lynch and Charlotte Flair opened up the show and this got a lot of TV time and ended up being a good match. While it did finish in a double count out, there was a crazy ending to this as Charlotte speared Becky through the LED board lights on the entrance ramp. These two will settle everything at Evolution as they will face off in the first ever last women standing match.

For Raw, I still do not understand what WWE is trying to go with Bobby Lashley. Recently, they have tried to pair him with Lio Rush. This week, during Lashley’s match against Kevin Owens, Rush was on the microphone the entire match. This became very annoying after a while and the crowd showed their displeasure as well. I cannot determine whether this means that they are trying to have Lashley turn into a bad guy with Rush at his side, or if they are trying to have the crowd embrace this?

For Smackdown, the Rusev and Aiden English story line has taken a sour turn.  The whole video ended up being English making a move on Lana, only to get turned down. This part makes sense. Where it started to get sour was when English said “the offer is still on the table.” That point in the story line started to make things awkward. Anytime Lana has been involved in Rusev’s story line, they end up being bad and this has the potential to go in that direction.

Both shows were really good this week. They both had great matches throughout the show and helped progress their story lines. I will have to say that Raw had the better show this week. A solid main event and some returns we didn’t see coming made this show great from start to finish. It looks like WWE is  going all out for Crown Jewel so hopefully WWE makes it more than just a glorified house show such as the Greatest Royal Rumble, which also took place in Saudi Arabia.