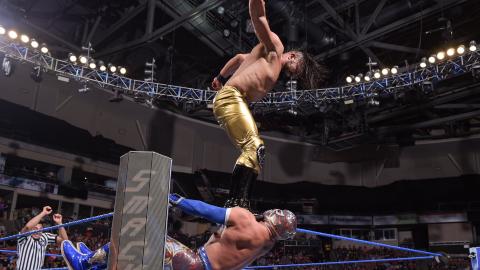 For Raw, lots of people are not invested in the Bobby Lashley vs. Roman Reigns match at Extreme Rules, but I thought WWE did their best in building it up this week and I thought it was a very entertaining this week. They started the show off with a pull apart brawl between the two and then each competitor got to say their peace after the brawl. While the Philadelphia crowd at Extreme Rules will probably act disinterested in this match, the buildup for it has been really good especially after this week and it does give this match a “big fight” feel.

For Smackdown, we finally got to see the Andrade Almas vs. Sin Cara match that had been building over a month and kept announcing that they would have, only not to have it. That finally came to an end this week and these two put on a great match. It wasn’t that long, but it didn’t need to be as the spots Sin Cara were doing were insane. This finally helps Almas get his foot in the door on Smackdown now that he has a credible victory. It will be interesting to see what happens next for El Idolo (hopefully a run at the US championship!).

For Raw, they didn’t even mention Brock Lesnar being on the UFC PPV this past weekend. That is ridiculous considering he is the main champion on the brand and is trying to now become a UFC Champion. Along with that, they didn’t even mention anything about his upcoming plans for Summerslam. WWE has handled the Brock Lesnar situation as poorly as you can.

For Smackdown, the lumberjack match between James Ellsworth and Asuka was something we really didn’t need to see. While fans wanted to see Asuka beat up Ellsworth, the rivalry for the women’s championship is still between Asuka and Carmella, not Ellsworth. While it did help build up the championship match for Extreme Rules, seeing these two fight wasn’t necessary.

With both of these being the go home shows before Extreme Rules, both brands needed to focus on the matches featured on the card. I feel that both brands did a pretty good job at doing this, but as far as who put on a better show is the bigger question. For this week, I will have to say that Smackdown had the better show this week. They focused on the WWE Championship match, had a pretty good main event, finally had the debut of Almas against a good competitor, and built up the US championship too. Overall, Extreme Rules is turning out to look like a really solid PPV, hopefully WWE gets positive results out of it and they have momentum going into Summerslam!