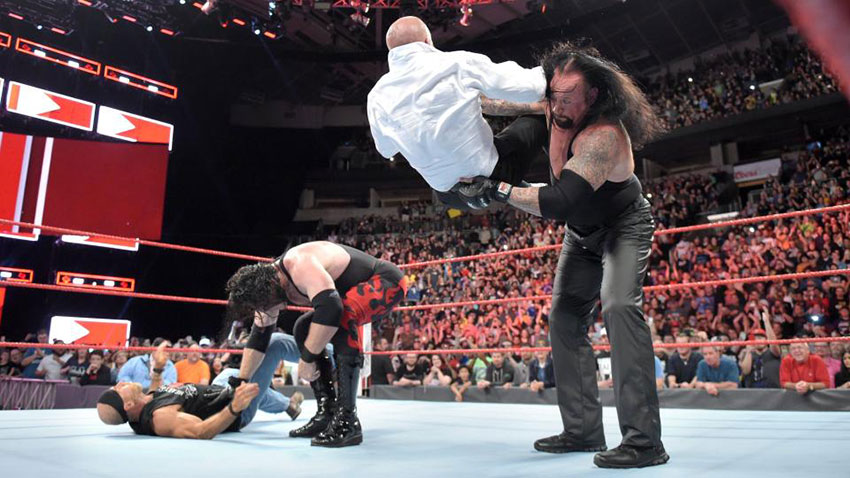 For Raw, the ending segment to build up the Triple H versus the Undertaker match was awesome. It started off with Shawn Michaels emphasizing that he thinks Triple H will win and that if Kane interferes, then he will step in and take care of that. This led to the Brothers of Destruction coming out to attack Michaels, only for Triple H to come out to save him. This led to a brawl that left the Brothers of Destruction standing tall after a double chokeslam. Segments like this are simple, but really help build up this fight and fans should soak this in as this will be the last time these two legends go at it.

For Smackdown, the brawl between Randy Orton and Tye Dillinger was quick, entertaining, and got a point across. Dillinger wanted revenge after Orton attacked Dillinger during his United States Championship match against Shinsuke Nakamura last week. Paige gave in and gave Dillinger a match against Orton. The fight between these two only lasted a few minutes, but they beat the heck out of each other. Orton ended up winning this brawl by going to his sadistic ways and put Dillinger’s finger between the turnbuckles, and bent it backwards. Not only does it question where this goes from here, but it’s a great story having Orton break one of Dillinger’s fingers considering he always uses his 10 fingers for his 10 gimmick.

For Raw, the whole the Shield vs. Braun Strowman, Dolph Ziggler, and Drew McIntyre has ran its course and isn’t really intriguing as it once was. Each member of the Shield faced off against a member of the other trio and two out of the three matches involved interference in the match. Having these teams brawl a few times before their match is entertaining. But, when this happens every week, it starts to get stale.

For Smackdown, the lack of programming for the United States Championship doesn’t make any sense. Since Shinsuke Nakamura has won it, he has only defended it twice and has only been on Smackdown maybe three or four times total. I was hoping that maybe they would give off the possibility of an open challenge at Super Showdown, but that doesn’t seem to be the case.

With this begin the go home show before Super Showdown, but brands had to advertise a lot for this PPV and get the last build up for it. Both shows were really good this week and should’ve gotten fans excited for the PPV. But, between these two, I will have to say that Raw had the better show this week.  Raw had a great closing segment, a great promo with Elias that had some of the loudest booing I have heard in a while, and actually put the Authors of Pain to smart usage! Smackdown had a great show this week, but the lack of the United States championship hurts them week by week. Overall, Super Showdown should be a solid PPV because all of the matches on this card got the proper buildup.