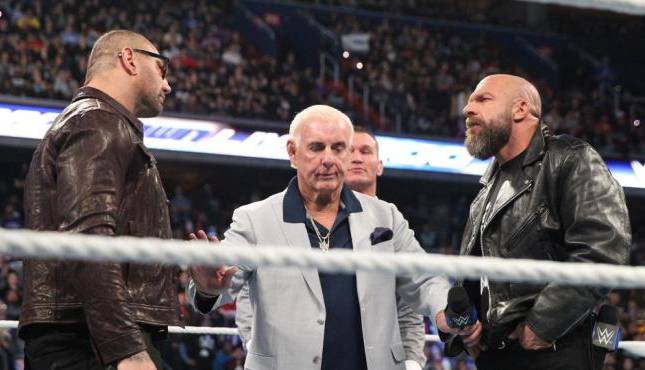 For Raw, the segment between Ronda Rousey and the Bella Twins went a lot better than people probably expected. They traded insults back and forth and it eventually led to some fighting. The Bella Twins brought out security, which Rousey took out easily but the twins got away before Rousey could get to them. Hearing some of the insults they were throwing at each other made this feel more personal and that’s what helps make a solid rivalry.

For Smackdown, out of all the stars they had featured on their 1,000th episode, the reunion of Evolution was the most intriguing out of all of them. While they were listing off their accomplishments, Batista threw a little shade towards Triple H about how Triple H has yet to beat him. Batista did say that if he were to ever come back to WWE for one last run, he would want to have a rivalry with Triple H. So is this a sign of things to come?

For Raw, the Finn Balor versus Jinder Mahal match wasn’t even worth watching. It was quick and was just there to promote the mixed match challenge. With the two PPV’s coming up, there isn’t much to really invest with the MMC.

For Smackdown, because of how big there show was this week, they did have to rush some things during the show and one of them was a World Cup qualifying match. The match was between The Miz and Rusev and the Miz won within a minute. Now, this was due to a distraction from Aiden English, which helps push that rivalry further, but this match did deserve to have more time.

Both shows were pretty solid this week. They were able to build up both Crown Jewel and Evolution effectively. But, because Smackdown had its 1,000th episode, fans knew that WWE was going to go all out for it. With that being said, Smackdown had the better show this week. Smackdown did a really great job of integrating the legends they brought back for the show into the rivalries they have going on currently. Along with that, they had a great match for the returning Rey Mysterio! Overall, if WWE follows through with Crown Jewel, it truly is looking to be a special event along with Evolution too.